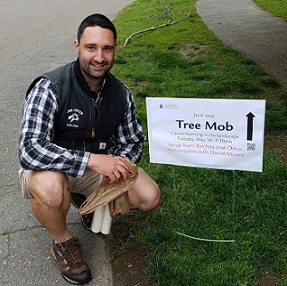 David’s research focuses on three aspects of syrup production. The first is to improve the efficiency of maple and birch syrup production by investigating methods of increasing sap yields while minimizing the wounding caused by tapping. The second is to determine how environmental variables associated with climate change (such as drought) affect syrup production. The third is to determine if sap can be harvested, and if syrup can be produced, from trees other than maples, birches, and walnuts. Though these research questions are very applied in nature, an in-depth understanding of plant anatomy and physiology is required to answer them. As such, he also hopes to contribute answers to basic science questions pertaining to winter-dormant-season sap flow dynamics in deciduous, woody angiosperms that occur in the northeast. Mechanisms other than transpiration drive sap flow in deciduous, woody angiosperms during the winter-dormant period, when these trees are leafless. Heat-pulse sap flow sensors are the primary tool he is using to answer these questions. Prior to graduate school, David ran a successful birch syruping operation, The Crooked Chimney, in Lee, New Hampshire, and his research is informed by his experiences in the sugaring industry.