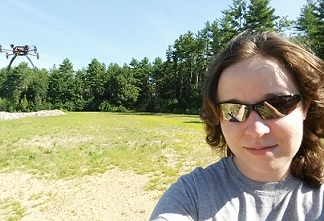 New Hampshire forests provide a number of invaluable services such as protection of our water resources, habitat for numerous species of wildlife, and play an important role in carbon sequestration. These forests, however, are declining due to increased development. Development not only directly removes forest from the landscape, but also degrades the quality of the remaining forests by exposing the forest edges to the conditions within a different ecosystem. Edge habitats may be less suitable for many of the organisms that once occupied the area, effectively making the remaining forest patch smaller for them to survive in. Being able to map the extent of edge habitat is important in order to understand the amount of core area, forest not influenced by neighboring land uses, is left so it can be conserved for the native fauna and flora that depend on it.  To accomplish this on a landscape level requires extensive field surveys, time, and money. LiDAR may provide a quick and cost effective means of mapping edge depth over large areas since it can be used to analyze forest structure, one of several forest characteristics that defines forest edge habitat. Additionally, unmanned aircraft systems (UAS), can give us a picture of edge effects from above over a specified area of interest. The focus of Heather's research will be on assessing the use of LiDAR and UAS data for identifying and measuring the edge habitat distance across numerous forest edge conditions and applying it to map edge habitat in the New Hampshire Coastal Watershed